In the area of the site we label Area A we can see the earliest habitation at Gabii. The early settlers started to build their homes, carving back the slope of the hill to make level spaces for huts, constructed with mud and straw. Evidence for these huts survives only in the holes of their structural posts which were cut in the bedrock. We can connect the dots of these holes to see the shape of at least one hut, an imperfect oval, and as well as a few other huts very close to one another. Outside the walls of these huts, two infants were buried in small tombs also cut into the bedrock. These infants, who died when they were 1 to 2 years old, were born about a century apart and must be buried next to the houses of their families. The rectangular tomb of the first was laid with delicate painted and polished vessels and personal ornaments, such as two bronze amulet bearers and decorative chains; the second had instead seven small vessels and tiny beads to accompany the infant in the afterlife. In this way, the mourning families kept their beloved children close by, while also demonstrating to anyone present at the funeral how they could afford to bury beautiful objects forever. This was in the late 8th century and into the early 6th century BCE.

The next phase of construction visible in Area A is less than 200 hundred years later when the huts were abandoned and the Gabines started to live in rectangular or square houses. The hut clusters which had previously dotted across the landscape became a city laid out along a brand new street grid with regularly-shaped city blocks. Two roads cut through Area A, running uphill to the rim of the former volcanic crater. Aligning with these roads, we can see that new channels connecting at right angles were cut into the bedrock to be used as new drains surrounding a new house or as the foundation trenches for its walls.

Area A and Area B (to the south) formed one city block within the new street grid. It took some time before these blocks were filled with new houses built with stone walls and roofs covered with roof tiles. The earlier structure in Area A was replaced by a slightly more visible, but still quite small, residence in the same footprint. This house was built sometime in the 3rd century BCE and located at the north end of this new city block. Only limited traces of the house are preserved: a few walls and hardened surfaces for floors. This house had as its neighbor, just down the slope in the same block, another similar house in Area B. The history of Area A then became intertwined with that of Area B, as both houses were abandoned at about the same time and the whole block was used as a quarry and a necropolis (see further Area B). 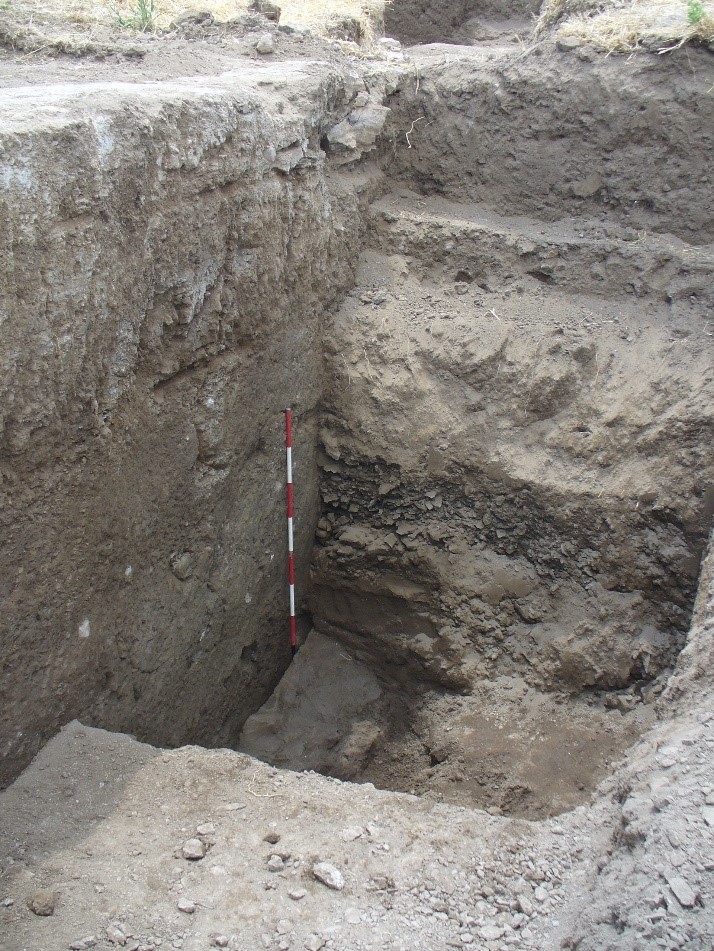